It doesn’t matter which among the many starting points you may choose to begin your Turkmenistan adventure. The country is generously dotted with landmarks and scenery that come unmatched up to today. You can begin at the capital, Ashgabat, which translates to “the city of love,” which, like any love story, was built after the pains and trials of the colonial war against Russia, culminating in the fall of the Geoek-Tepe fortress and leading to the present freedom of the Turkmen. Now, picturesque gardens are placed strategically through out this valley city, keeping guest and citizen alike always aware of the love which built the city.

You can also visit the oasis known as "Mary" in the center of the enormous Kara Kum Desert. Once a military administrative center for the Russians, it is now famous for its History Museum that is a treasure trove of artifacts and relics of the past that have shaped Turkmen nationalism.

Like many Asian countries, Turkmenistan offers not simply diverse culture, but a rich history as only the Orient can provide. Agriculture as well as animal husbandry was first practiced in Turkmenistan, and in Ashgabat, the capital of the country, the oldest agricultural communities were once situated. Ancient civilizations have helped in shaping the authentic culture of the Turkmen. From the Persians was Alexander the Great who conquered the great ancient cities. Trading caravans worked their way into the heart of the country and made it one of the major stops along the famous Silk Road. The country has also experienced its own share of geopolitical conflict in the past with the Persian shah Khiva khan and the Bukhara emir dividing the land. When ideas of socialism erupted throughout the world, it was also influenced to ally itself for a time with the Soviet Union.

Today, it is a beautiful republic filled with intricate architecture, many verdant parks adorned with enormous statues and sculptures, and oases that bring back old-world charms and dreams of Arabian nights. Among the traditional heritage of the Turkmen is unparalleled hospitality that has sprung out of the lessons learned throughout history. A nomadic people, especially in the face of ancient invaders, had nobody to turn to except others. Even in modern Turkmenistan, you cannot find a home that will not welcome you with such warmth and joy, where each guest is treated as if sent by the deities themselves.

The Turkmen have also maintained their family-oriented culture by teaching children early on about the value of parents. In turn, Turkmen are among the most protective and caring parents that you can find. While living in the paradise-on-earth oasis, you will discover a morally-upright and friendly people to complement the lovely landscape. 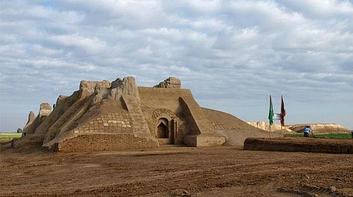