Mongolia covers 1,566,500 square kilometers of land, but only about 2.4 million people are settled in this country. Because of the arid weather, many parts of the Mongolian boundaries are not ideal for residence. Most of the country’s territory is covered with deserts, mountains and steep plains. The two biggest mountain ranges are the Altai Khangai and Khentii. These magnificent rocky mountains, on the other hand, are a source of clean waters and streams. The Gobi desert is the most popular desert in Mongolia and covers thousands of kilometers.

Most of the famous attractions of Mongolia are located in its capital city, Ulaanbaatar. In fact, this is the one of the only cities with sightseeing type places to visit in Mongolia. It has the country’s one and only International airport and a single international rail line. One million of the total 2.8 million population of Mongolia live in Ulaanbaatar. It is also the political, economic and cultural center of the whole country. Here are some of the most famous destinations in Mongolia:

1. Sukhbaatar Square— located at the heart of Ulaanbaatar, this is where many historical statues are located. A large statue of Sukhbaatar, a famous patriot, can be found here. Surrounding the Square are important places such as the Stock Exchange, the Parliament house, the Drama Theatre and Cultural Palace.

2. Choijin Lama Monastery— this is a classic temple designed with the traditional and classical Buddhist architecture. This served as the home of Luvsan Haidav Choijin Lama. This now serves as a museum for collections of Buddhist artworks, tsam dancing masks and original silk icons.

3. Bogd Khan Palace Museum— this served as the home of Mongolia’s former king, Javzan Damba Hutagt VIII. Like the Choijin Lama Monastery, it has a collection of Javnzan Damba Hutagt, which is comprised of gifts from other rulers of the world.

4. The Zanabazar Fine Arts Museum— this exhibits a collection of art works made by prominent artists and painters, including works from the ancient era up to modern times. This museum houses several rock inscriptions, embroideries, and costumes of the ancient people. The most valuable possession of this museum is the collections made by Zanabazar, a renowned artist and sculptor. Zanabazar was the first ruler of Mongolia.

The Mongolians are known for their hospitality. In fact, when guests arrive, traditional offerings are served in honor of the guests’ presence and to show that the hosts are glad to have visitors with them.

Religiously, the culture of Mongolia has evolved over thousands of years. Buddhism is spread widely in this country, which is why the majority of Mongolians follow Buddhism beliefs and doctrines. More than 750 temples and monasteries have been built since the 20th century, although many were destroyed during the People’s Revolution.

As mentioned earlier, the people of Mongolia are used to a nomadic lifestyle. Because of its climate and agricultural concerns, Mongolians are used to having many multiple, non-permanent homes; in fact, this is one of the very few countries which include nomadic lifestyle as a living tradition. 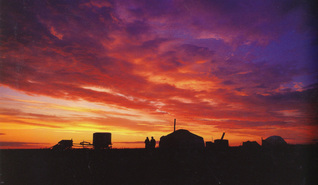