Ghana is just a few degrees north of the equator. The "center of the world", or the point with a latitude and longitude of zero degrees, is located about 600 km to the south of Accra, in the Gulf of Guinea, and the Greenwich Meridian passes through the industrial town of Tema. Ghana encompasses an area of 238,500 square kilometers, consisting primarily of low, flat plains, low hills and a few rivers. The highest point in Ghana is Mount Afadjato, just 885 meters high. Southern Ghana has many evergreen forests, helped by the six month long wet season, from April to mid-November.

There are no world famous tourist spots in Ghana, but there are hundreds of kilometers of coast and many beautiful beaches, including Busua and Langma, attracting many tourists each year. Several ruins of European forts and castles also dot these coasts, reminders of the booming slave trade that once operated in this region. The town of Kumasi is famous for its traditional Ashanti crafts, including Ewe cloth, with beautiful patterns and colors. The Akosombo Dam forming Lake Volta is well worth a visit, with dense forests extending right up to the border with neighboring Togo. Lake Volta is the largest artificial lake in the world, covering nearly 3,275 square miles, and the Volta River has large populations of hippos along with many other primates and birds. Though it is quite an adventure to get there, the Baobeng Fiema Monkey Sanctuary is well worth the trip. This is a refuge for the black and white Colubus and Mona monkeys, and there is also a large butterfly population.

The Ashanti tribe is the largest ethnic group in Ghana, a matrilineal society, unlike most other societies. The tribe is known for specialized crafts including weaving, woodworking, metallurgy and ceramics. The colorful Kente cloth, woven by men, has narrow strips with very colorful patterns. These strips are sewn together to form beautiful cloths worn on ceremonial occasions. Regardless of tribe, the village is the binding force among all Ghanaians, and everybody in a village participates in all its major ceremonies. For example, attendance at all funerals is a must for all the inhabitants of a village. The official language in Ghana is English though the government encourages a lot of ethnic languages. French and Hausa are also spoken by a significant portion of the population. 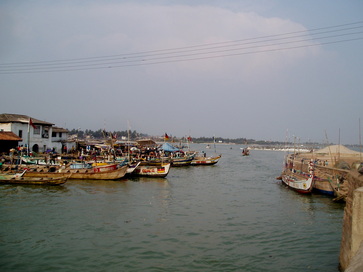