China covers an area of 9,596,960 square kilometers, stretching from the mountain ranges of the Himalayas to the deserts of Mongolia. It consists of more than 5,000 islands including the Spratlys and Paracels, two of the most disputed islands in Southeast Asia. It is also comprised of 22 provinces and 5 autonomous regions. Hong Kong, one of the most famous provinces of China, is now considered as a Special Administrative Region. Beijing, its capital, is a city with over 11 million people.

Due to the country’s size, its climate is diverse in many parts of the region. This ranges from approximately 48 degree Celsius in the northwest during summer to negative 40 degrees in the far north during winter.

Besides its famous natural resources, China is known for the many attractive sceneries and landscapes that have awed many tourists from all around the world. With its huge land area, it gives people thousands of beautiful sceneries. Some of these are the landscapes in Zhangjiajie, Jiuzhaigou, and the Huanglong Scenery Zoneal, all of which are listed as World Heritage Sites. Some of the most famous among China’s attractions are:

1. The Great Wall of China— a heritage site that tops the list of the most sought after famous attractions in China, The Great Wall of China stretches across 8,851 kilometers that pass grasslands, deserts, mountains and plateaus. This is the most famous historical place in all of China. It has been around for over 2,000 years, with some areas having entirely disappeared. With its historical significance, this is visited by thousands of visitors every year.

2. Guilin Landscape— located in Guanxi Zhuang Autonomous Region in southwest China, this awe-inspiring site boasts of no freezing winters or scorching hot summers. Geological research has proven that Guilin has not existed during all of the last 300 million years. It was only developed as the earth’s crust was raised to become land. Over time, corrosions have resulted in mystical rivers and caves. This is considered to be the number one landscape in the world, which Chinese people are proud of.

The Chinese culture is unique, which is why it has moved thousands of people from all over the world. The kung po chicken in restaurants, the traditional noodles that many people eat everyday, and even the Disney character Mulan, are all part of China’s well-defined culture. For Chinese people, their culture plays an important role not only in their society but in the world.

With the very long history that China has, its culture is a wide array of traditions and beliefs that relate to arts, music, theatre, food and religion. Explaining every little aspect of their culture is difficult, because it is composed of several distinctive beliefs and traditions. The Chinese culture has touched the lives of thousands, and is continuing to mold people all over the world. 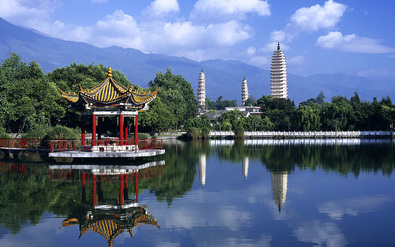