Chad is a land with varied terrain characteristics. The northern area is a desert while the northwestern region is mountainous. The south is primarily low-lying while the center is wide, arid, and flat. This is a large country, with over 1.2 million sq. km. of land. Temperatures vary depending on the region, although the country generally has a desert climate. The wet season comes in May and lasts till September or October. Precipitation also varies depending on the geographical zones, with the driest areas receiving less than 2 in. of rain each year and the wettest areas receiving about 35 in. a year.

The predominant religion in Chad is Islam, a religion practiced by about half of the population. About 20% are Catholics and 14% are Protestants. A smaller percentage is animists, atheists or not affiliated with any religious groups. Most Muslims reside on the eastern and northern regions while Christians live predominantly in the northern areas.

Chad has two official languages: Arabic and French. These languages are frequently used in business, especially Arabic, which is widely spoken in many local communities. However, with the wide diversity of cultures, religion and ethnicity, there are in fact more than 100 languages spoken throughout the country along with several dialects, depending on the region.

A staple of the Chadian diet are grains like sorghum and millet. A common dish served is alysh or biya. This is made with ground millet, formed into balls and served with dipping sauce. A favorite breakfast fare called fangasou is made from millet. Another breakfast or snack fare is fried pancakes made from millet flour.

Fish-based entrees are common since Chadians frequently use the day's catch right away. Dried and salted or smoked fish are often served with rice. Common fish types include tilapia, carp, Nile perch, eel, balbut, banda and salanga. Meat is sourced from sheep and cattle. In the north, chicken is often served, thanks to a good number of poultry raisers in the region.

A favorite beverage is carcaje, which is made from hibiscus leaves extract and sweetened. Millet beer is served in the southern region but is not found in northern areas. Beer made using white millet is called coshate while red millet beer is called billi-billi. 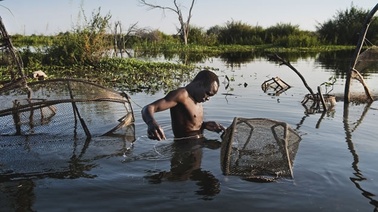