The warm tropical climate of Zimbabwe with sunshine throughout the year is one of the most welcoming features, with a dry season marked by a short span of cold between the months of May to September. November to March often has heavy rainfall. The ideal time to visit the magnificent falls of Zimbabwe would be just after the rainy season, between April and May. For adventure-seeking tourists, the best months are August to December. May to September is ideally suited for seeing the wildlife and visiting the botanical gardens. Zimbabwe is a land blessed with extraordinary scenic beauty, along with a diverse and rich wildlife.

One of the most unique features of Zimbabwe is the ancient ruins, built in a dry stone style. The most famous of these is found in the Great Zimbabwe ruins of Mosvingo. Another key attraction is Victoria Falls (also known as the smoke that thunders), one of the world's seven natural wonders. It is one of the most breathtaking and grand sights you will witness in your lifetime. The majestic and astonishing falls are most certainly one of the worlds top tourist attractions. Along with the wonderful falls and the heritage sites, Zimbabwe also has one of the world's largest man made lakes, Lake Kariba, with many popular tourist activities. For those who want to have a taste of nature, Zimbabwe offers the Hwange National Park, Zambezi National Park, and Mana Pools National Park. The parks offer a large range of activities including canoeing, boat safaris, and game viewing.

Zimbabwe is a land of a variety of cultures, encompassing different ceremonies and beliefs, the most common among them being Shona. Shona constitutes the largest ethnic group in Zimbabwe, but a mixed structure of beliefs exists here, with Christianity being the most predominant. Christmas is widely celebrated in Zimbabwe, overlapping with the harvest festivals. The Zimbabweans are known to be very courteous, affable, cheerful and friendly, and harmony between the black and white races is clearly evident. There has been a great influence of European culture in the shaping of the rural and urban areas, most significantly in the fields of architecture and government structure. There is a striking similarity between the Shona, Ndebele, and groups of Tonga, Shangaan, and Venda, with respect to marriage practices and the belief in supernatural existence. The struggle for existence between the various tribes and groups was instrumental in shaping the national identity. English is the main language in Zimbabwe, though it is not predominant in the rural areas. Shona and Ndebele are the other languages that are spoken, but generally the Zimbabweans mix languages. 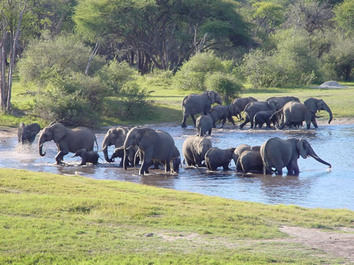