The S-shaped Vietnam is located in the southeastern part of the Indochinese peninsula and occupies about 331,688 square kilometers. Vietnam spans a distance of 1,650 kilometers from the most northern point of the country to most southern point of the county, and is about 50 kilometers through its narrowest width. With a coastline of 3,260 kilometers, excluding the islands, Vietnam also lays claim to the 12 nautical miles out from its adjacent coasts. What makes Vietnam such a fascinating country to visit is that the area all around Vietnam is surrounded by lovely mountains and exquisite coastal views.

Vietnam has long been a tourist attraction mainly due to the country’s old temples and rich ecosystems. Today, even more tourists flock to this country to view the attractive sites that many weathered travelers have been talking about for a long time: the exquisite mountains, the lovely beaches and the unique architecture of buildings in the major cities of Hanoi, Hue, Danang, Ho Chi Minh, Nha Trang, and Dalat. Also, this country has traditional villages that are truly an eye-opening experience. When you go to Vietnam, you can be sure that you will have a trip that you will never forget. Sightseeing in this country will definitely make your vacation satisfying and complete.

Vietnam has four major religions and philosophies that shape the spiritual life of the Vietnamese people; the main religions practiced are Buddhism, Taoism, Confucianism, and Christianity. For centuries, these philosophies have been formed and shaped along with the famous Chinese beliefs and the old Vietnamese animism, known as Tam Giao, or what the Vietnamese call “The Triple Religion”.
While the official language of the country is Kinh, other dialects and languages are spoken by different subsets of minorities. For example, Khmer and Lao dialects are spoken in some regions, while other larger dialects such as Mandarin, Cantonese, Russian, French, and English are spoken in areas throughout the country. With many influences from Western and larger Asian countries, Vietnam's culture is indeed a fascinating thing to witness. 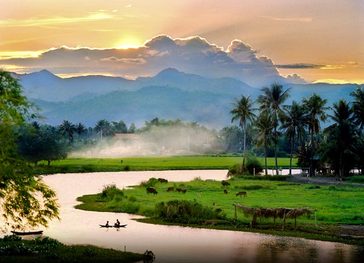