With a land area of 143,000 square kilometers, what Tajikistan lacks in space it compensates for in wealth. The mineral resources in the country are at par with the largest countries around the globe. Beneath the mountains that cover Tajikistan are large deposits of metals, minerals, and many precious and semi-precious stones. Mining and metallurgy are key industries present in the country. A geographically mountainous country, Tajikistan is territory spiked with proud mountain ridges and canyons with façades that very few eyes have seen. The presence of large chains of mountains is also one of the sources of the immense flourishing ecological web in this country with many rare species of plants and animals.

In different altitudes of the mountains, different types of ecosystems are found. There are rolling valleys with healthy rivers bubbling along on the bottom, and a little higher up are grassy hills that lead to forested mountains. On top are white snowy mountains. Among the life forms growing abundantly are Bukhara deer, mountain partridges, cane cats, snow leopards, goitered gazelles, tigers, and pheasants. Riparian forests, tamarin thickets, Asiatic poplars, and many fruit-bearing trees also thrive in the land. Because of the astonishing biodiversity of the country, several nature reserves have already been established, such as the Tiger Hollow, Ramit, Dashtidzhum, and others.

With history reaching as far back as the 7th-10th millennia B.C., Tajikistan has a culture to fascinate all. There is a great variety of cultures and traditions stemming from many influences such as the neighboring countries of China, Afghanistan, Uzbekistan, and Kyrgysztan. Through the optimization of their mineral resources, the people express their artistic sensibilities through sculptures and carvings made of different types of stones, metals, and clay. Archeological works have dated some of these works to as early as the 6th and 5th centuries B.C. Paintings are also found throughout the country. One of the national arts involves fabrics and embroidery, with weaving as an ancient artistic venture for the people.

The art of weaving and textile production is a highlight in Tajikistan, which produces fabrics such as brocade, Karbos, shokhi-kamus, and chit. These textiles are favored throughout central Asia and have found their way into the courts of ancient nobility and empires, and have travelled through the Silk Road. Decorative carvings are also famous, and can be found in everything from the hilts of swords to doorknobs and picture frames. Aside from crafts, Tajikistan also has its own Golden Age during the Samanid rule when many poets, writers, philosophers, artists, craftsmen, and scientists emerged. 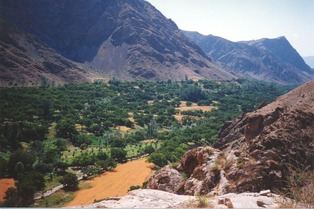