The tiny nation of Suriname is made up of two distinct geographic regions: the low-lying coastal area in the north and the tropical rainforests of the south. Most of the population resides in the north where agriculture can be used for sustenance and trade. A small number of the inhabitants, however, choose to live in the savanna near the border shared with Brazil.

Suriname has a tropical climate, characterized by very hot weather, with temperatures that tend to remain constant all year round. The dry season lasts from February until April and again from August until November. The wet seasons are from April until August and from February until March.

One of the biggest tourist draws in Suriname is its rainforest, with one of the most exceptional biodiversities in the Amazon. In fact, the Central Suriname Nature Reserve has been named as a UNESCO World Heritage Site. Suriname also has several national parks of note, including Coppername Manding, Galibi, Sipaliwani, and Wia Wia. The Tafelberg Nature Reserve, also an excellent stop, is fed by the Saramacca River and surrounds Tafelberg Mountain.

The natural beauty of Suriname has been well preserved with some of the most stunning waterfalls in the region, including the famous Blanch Marie, Wonotobo, and Raleighvallen.

Surinamers have also preserved a few of the plantations, now remnants of a bygone era. One such site is the Laarwijk, a lovely spot that tourists travel by boat to reach. Another point of interest is the 114-year-old Cathedral of Sts. Peter and Paul.

About 20% of the population in Suriname is Muslim. Inhabitants also practice Catholicism, Protestantism and Hinduism. Certain ethnic groups are more commonly associated with certain religions. Maroons and Creoles practice Christianity; the Javanese practice Islam, while a majority of Hindustanis are Hindus, although a few are Christians or Muslims.

The official language in Suriname is Dutch, the medium of communication used in the business, media, education and government sectors and spoken by at least 60% of the population. In some regions, a Creole tongue called Sranan Tongo is also used. Other common dialects include Surinamese Hindi, Javanese, and Maroon. English is also used, primarily for education and business. 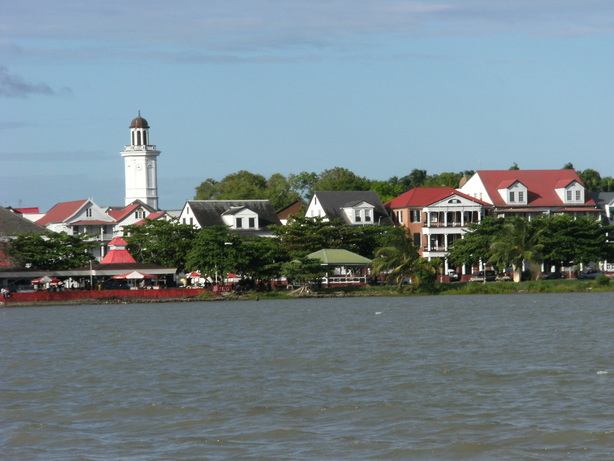