The Netherlands is located in northern Europe. A wonderful and unique country on its own, it has many beaches, canals and rivers in every beautiful city. The topography of the country is interestingly flat and low. The highest point is only about 321 meters above sea level. Most areas in the country today are the result of land reclamation since these areas were originally below sea level. Sea walls and dikes protect the Netherlands from being inundated with sea water.

Amsterdam, the capital of The Netherlands, has about 730,000 residents, Rotterdam follows with 600,000 people and The Hague is third with about 450,000 inhabitants. Holland is just two of the twelve Dutch provinces found in the Netherlands.

Amsterdam is one of the most historic cities in the Netherlands. The city can easily be toured by bicycle since it is predominantly flat. Traveling this way will give the tourist the opportunity to appreciate and sight-see the city's canals and nearby places. A culture of art dominates Amsterdam. Two of the Netherlands' famous museums, the Van Gogh Museum and Rembrandt House, are located in the city. The works and collections of 17th century Dutch artists like Rembrandt, Vermeer, and Frans Hals are showcased in Rijksmuseum.

In keeping with the Netherlands' rich history, one famous landmark is the museum of the attic that became the home of Anne Frank, where she and her family hid from the Nazis during the 1942 occupation. This museum is open to visitors. Ms. Frank's celebrated diary is still well-preserved and on display in her house today.

Tourists and visitors wanting to fully maximize their experience while in the Netherlands might consider having an Amsterdam card, allowing them free use of public transportation and discounts on restaurants, museums, and attractions.

The Netherlands has a diverse culture due to regional differences as well as foreign influences brought in by the merchants during the early times of Dutch history. The country's main language is Dutch while Frisian is also a well-recognized language and often used. The other Dutch dialect is Limburgish.

Calvinism is a way of life in Dutch culture because of its simplicity. Sint Nicolaas, or Sinterklaas, is a very traditional and popular festivity in the country. It is celebrated during the evening before December 5, quite similar to the celebration of Christmas Eve in other countries. Other popular traditions are the Easter celebration and the feast of Sint Maarten. 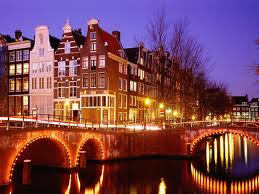