The main island of Mahore, or Grande Terre, is 24 miles long and 14 miles wide and has a high point of 2165 feet above sea level. The island is mainly composed of volcanic rock, making the soil very rich in some areas. There is a coral reef surrounding the island, which is a habitat for fish and also affords protection to ships that enter the harbor. The capital of Mayotte is Dzaudzi, situated on one of the smaller islands and also one of its ports. The island has a lot of deep ravines in its undulating terrain with volcanic peaks. The climate is classified as tropical and marine and is largely influenced by the Indian Ocean. The northeast monsoon hits Mayotte from November to May with occasional cyclones.

You would find a lot of wattle and daub or coconut frond huts in the areas surrounding the capital, an architecture influenced by Malagasy. The coconut fronds are tressed and mud daubed on the wattle made from these fronds. So a walk along the streets on Mayotte is an interesting experience for most tourists. The mountainous terrain makes for a very good hiking experience and a climb to the top of Mount Choungui (660 meters) provides a panoramic view of the island. Diving in the coral reef is a major attraction, and this lagoon, the worlds largest, is a riot of marine life. In the months of August and September, humpback whales are spotted in the lagoon and are an impressive sight. The southern coast of the island is a breeding place for sea turtles and the huge creatures are a rare treat for visitors to this area.

French is the official language, though most Mahorans as they are known, speak Shimaore, which is linked to the Comorian islanders. Most children attend Koranic schools to learn Koranic text in Arabic, a tradition passed down from generations of the Islamic influence from their previous Arab masters. Swahili is also largely understood, a language predominant in the entire coastline states on the African subcontinent facing the Indian Ocean. Dress styles follow both the European style and the Comorian fashion with the Muslim robe, or kandzu, and the embroidered cap, or kofia. Most women wear veils along with the wrapped garment. 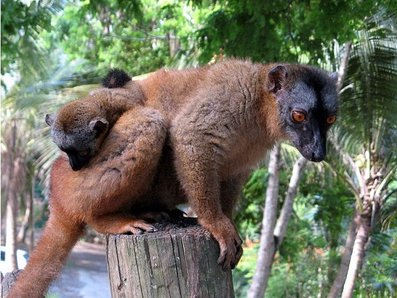