Martinique enjoys a tropical climate with a rainy season from June to October and an average temperature that is a humid 63 degrees Fahrenheit. Martinique, often referred to as the "Paris of the Tropics," is the most romantic of the Caribbean islands to the north of the Trinidad and Tobago islands. Dominica is located just to the northwest and St. Lucia is situated to the south of this unique island which prides itself on having great architecture, fashion, music, and fine French cuisine. The coastline of this exotic island is indented and there is a dormant volcano close-by, however, the overall Martinique terrain is mountainous and very picturesque. 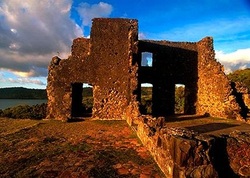 "Fort-de-France", once known as "Fort Royal", is the biggest city and the capital of the island. It has a population of 134,000 and is located on the western coast of Martinique. Its Mayor, Serge Letchimy, is also a member of the National Assembly of France and a member of the Martinican Progressive party. Historically Fort-de-France was also known as "Fort-Saint-Louis" and was built in 1638 to protect the city against attacks by Jacques Duparquet, the first governor of Martinique. After being destroyed, the fort was rebuilt in 1669 under orders from Louis XIV by the Count of Blenac in an architectural design known as "Vauban." The name "Vauban" comes from Marquis de Vauban, who was a French Marshall and military engineer. Vauban had become famous for being able to both design and break through the forts he built.
In 1839 the city of Fort-de-France was mostly destroyed by an earthquake and in 1890 by fire. It was only after the volcanic eruption of 1902, that destroyed the nearby town of Saint-Pierre, also known as the "Paris of the Caribbean," that Fort-de-France started to become economically significant, although it was never as well received as Saint-Pierre.

The finest French products from Limoges and Chanel in France are available in Martinique and many young people from this island travel to France for their university education. The Creole language is a mix of English, Spanish, Portuguese, and African, and is a spoken, rather than written language. Many French tourists like to visit this island while on vacation, since the main language spoken in Martinique is French.

Hinduism is practiced in parts of Martinique although most of the population is Roman Catholic. In fact when the French painter Paul Gauguin, in 1887, visited Martinique, he became greatly inspired by the gestures and symbols of Hinduism he found there, and so Hinduism influenced many of the famous paintings he created when he lived in Tahiti.
Qunar