Iran is a country of mountains and deserts in Central Eurasia. The eastern side of Iran is dominated by a high plateau of large salt flats and huge sand deserts, including the Dasht-e Kavir, Iran's largest desert. The plateau is surrounded by even higher mountains, including the Zagros and the Elburz. Farming is largely concentrated in the narrow valleys or plains in the west and north, wherein there is more rainfall. Iran's huge reserves of oil lie in the southwest, along the Persian Gulf.

Iran is a country with tremendous cultural and historical attractions which draw in countless numbers of tourists in every season of the year, but mostly in spring and at the time of Noruz, the advent marking of the New Year. The beauties and attractions of the country are scattered throughout. The unique structures of the high-rise buildings, the astonishing mountains and valleys in the countryside, and most of all, the beautiful deserts are all attractions that you will not see everyday. So put on your travel shoes and get ready to take in all the unique sites of Iran.

Iran's cuisine consists of a huge variety; the culinary dishes of Iran reflect the country's tradition and culture in a great way. Their food is comprised of both raw and cooked food. Raw food includes nuts, fruits, herbs and vegetables, while cooked foods are mostly non-vegetarian. Iran's cuisine speaks of the wide variety of desserts and appetizers that are more popular all over the world. The food would be bland without the spices that used in a special way in most of the dishes.

The table etiquette should also always be kept in mind. Iranians have been known to have the nicest etiquette in dining; the serving of the food and the table settings are all considered a part of the dining process.

Some of Iran's main dishes are rice and bread. There are also different varieties of rice preparation; the preparation differs with the course of the meal. Damy, chelow, pollo and kateh are the most common preparations for rice in Iran. Breads are commonly known as nan. Another part of Iran's unique dining experience is because of the wide range of beverages that they make from many fruits. The traditional drink of the Iranian people with a particular meal is commonly known as doogh. Khak and sharbat sheer are the other types of drink that are famous in Iran. So if you are in Iran, bring your appetite and get ready for a fully satisfying meal thatyou will never forget. 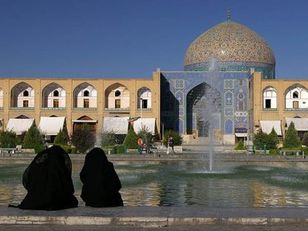