Composed of 17,000 beautiful islands, Indonesia is the largest archipelago in the world. Its islands stretch to up to 5,000 miles along the equatorial line. It only has two seasons—the dry and rainy seasons. Dry season lasts from June to October and rainy season from November to March, often making the air chilly
Indonesia is a land full of mountains. It also has beautiful volcanoes, forests and beaches that are visited by thousands of tourists year after year. Indonesia is one of the countries that reflects Asian people in general. Because of its diverse cultures and beautiful tourist spots, it has become one of the most visited countries in Asia.

The vast archipelago of Indonesia offers several tourist attractions that are known throughout the world. Indonesia has beautiful places and tourist spots known all over the world. Some of these include:
1. Sulawesi— a famous orchid shaped island in Indonesia, Sulawesi can be tracked on first glance of the map of Indonesia. It has abundant nature and beautiful natural spots that offer fascinating and thrilling travel experiences. There are a number of places here with historical importance, which are worth visiting.
2. Bali— this is by far the most famous island in Indonesia which is popular in movies, thus making it the most sought-after destination in Indonesia. It takes pride in its pristine white sand beaches, its world class services and adventure activities that have made visitors want to keep coming back.
3. Jakarta— Indonesia’s capital, Jakarta is where most establishments are built. This is where people shop in beautiful stores designed to offer the best products such as designer bags, shoes and clothes. There also are many antique shops that are popular among tourists. Indonesia is famous for antiques which have high price values.

4. Lombok— a place where the most beautiful handicrafts are found, Lombok is a place where people find rattan furniture and woven fabrics.

The culture of Indonesia has roots from a myriad of customs, beliefs, religions and values. Most of Indonesia’s islands are multi-ethnic, resulting in enclaves. Their cultures are mixed to certain degrees and Muslims share influences that are distributed among many groups, giving them similar cultural features, such as arts and way of dressing, social interactions and religious beliefs. Indonesians have varying cultural and social orientations.
The majority of Indonesians are Muslims, while other religions exercised are Buddhism, Catholicism, Hinduism, Confucianism and Protestantism. In terms of music, the primary musical instruments are guitars and ukuleles. Traditional games are also part of the Indonesian culture, such as bull races, cockfighting and stone jumping, although its national sport is sepak takraw.
The culture of Indonesia has been passed from many generations, and very little has been changed. It offers a wealth of silks, traditional arts and crafts, and many other exquisitely beautiful items. There are festivals of all sorts, many of which are celebrated and associated with religious beliefs. These events are made more majestic with dances, music and other performing arts. 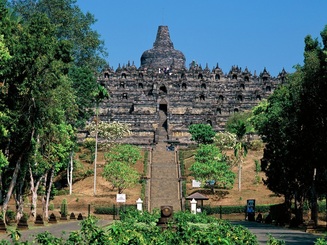