The second-largest island in Europe after Great Britain, Iceland is relatively young having been formed by volcanic activity nearly 20 million years ago. The island is considered part of both the European continent and the North American, as it sits atop the Mid-Atlantic Ridge, an underwater mountain range created by the diverging Eurasian and North American tectonic plates. Hekla, located in southern Iceland along a fissure in the Mid-Atlantic Ridge, is Iceland's most active and famous volcano. Approximately 11% of the surface of Iceland is covered with glaciers, of which Vatnajokull Glacier is the largest. Only about 1% of Iceland is cultivated.

The most famous geyser in Iceland, Great Geyser, is said to have first erupted in the 14th century. While it erupted with regularity for centuries, it mysteriously stopped for several years until an earthquake in 2000. The Blue Lagoon, Iceland's most famous geothermal spa, contains silica and sulfur, which are believed to ease skin disorders. Located on the Reykjanes Peninsula, the water of the Blue Lagoon is heated by a nearby geothermal plant, Svartsengi. Vatnajokull Glacier is the largest in Iceland. Seven volcanoes, including Grimsvotn, are located underneath the glacier, which is why Iceland is called the "land of fire and ice." Because of its extreme northern position, The Northern Lights are visible in Iceland between September and March. Charged particles from solar wind crash through the earth's magnetic field and hit the gases in the atmosphere, resulting in brilliant, glowing, flowing waves of red, green or violet color across the night sky.

Icelanders take great pride in their Viking heritage and work to preserve the language and culture. Painting, music and literature are deeply rooted in Nordic traditions. Landscape portraits record village life. Nordic music forms are the basis for Icelandic music. And Icelanders' Sagas are Iceland's best-known classic prose that takes place during the settlement of Iceland. Museums, art galleries and exhibitions are numerous throughout Iceland. Each region has its own local museum. Reykjavik also has several libraries, theatres for live performance and cinemas. Sports are also popular in Iceland, with most children and teenagers involved in some type of sports activity. 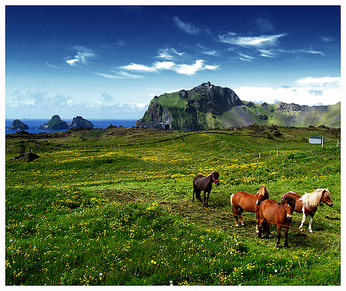