Located at the southern part of China and at the eastern part of Macau, Hong Kong has a humid subtropical climate. During its summer months, the weather is hot and humid with the occasional rain and thunderstorms. It is also in these months that typhoons and landslides occur in the area. The winter months start with sunny days and progress to cloudier ones in the month of February.

For the terrain, Hong Kong has a lot of mountains and hilly slopes. Because of this, less than 25% of the total land area is developed and a great portion of it is used as national parks and nature reserves. With its long coastline, Hong Kong also has beaches, bays, and rivers.

Due to its urbanization and geography, one of Hong Kong’s growing concerns is pollution. Because of this, the government and its people have made great efforts towards greening the island. Today, greening projects abound and one of these is the severe restriction of the reclamation project at Victoria Harbor.

There is much to see and experience in Hong Kong. The Star Ferry has been in operation for more than 120 years now. It transports its passengers across the Victoria Harbor allowing a great panoramic view of Hong Kong’s skyline.

Ocean Park is located in the southern part of Hong Kong Island. It is a theme park as well as an aquarium that is said to be the largest in Southeast Asia. With is huge marine collection, this is considered the best marine education center.

Victoria Peak is one of the best places where you can admire the city’s skyline especially at night. By taking the Peak tram, you can reach the Peak Tower where the best view of the city can be seen. The peak also has a lot of shops and restaurants that not only offer great views of the city but cuisines and items that are world renowned.

Ever since its opening, Hong Kong Disneyland has been a very popular stop over for locals and tourists alike. With the Western attractions found in almost every Disneyland theme park, the Hong Kong Disneyland is also known for giving them a bit of Chinese twist.
The Repulse Bay is one of the many places where you can enjoy the waters surrounding Hong Kong. A place that affords its visitors a chance to get away from the urbanized life of Hong Kong, Repulse Bay has clear blue waters and golden sand.

All thanks to its history, Hong Kong is a place where the East meets the West. Here, you can see that there is a perfect and striving contrast of its people living in a modern and Western world while at the same time having the Chinese traditions at hand. It is in Hong Kong where you can see the world’s longest outdoor escalator system that is being used by people who still practice age old Chinese traditions. Another great example of the East meeting the West is the application of Feng Shui in various construction projects.

With its location, Hong Kong is widely known for its status in the trade industry. However, it is most noted for its significance in the entertainment industry. In fact, Hong Kong has produced many world renowned entertainers such as Jackie Chan, Chow Yun Fat, and John Woo. 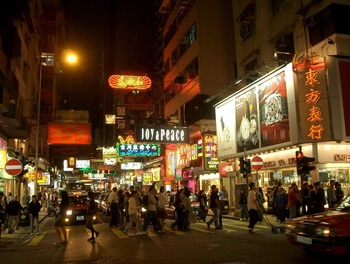