Greenland is the largest island in the world, covering an area of 836,109 square miles. From its geographical location, it belongs to the North American continent. Across the Nares Channel there are just 16 miles separating northwest Greenland from Canada. Additionally, Svalbard and Iceland are 310 and 170 miles away.

This country is 1,659 miles across from its farthest point north of Cape Marris Jeppup to the southernmost tip of Cape Farewell, which lies at a latitude similar to Oslo. The internal icecap wraps an area of 677,676 square miles and signifies 10% of the total fresh water of the world.

Greenland's untouched beautiful terrain is covered with ice and snow consisting of spectacular glaciers. A country of rare picturesque sites offers the travelers a unique experience such as summer cruises in the midnight sun and whale watching. Other than that, Greenland has many winter activities to engage in such as dog sledding and northern light viewing. The excellent season for viewing the northern lights is between mid-August and late March when the air is clear and the nights are long.

Just imagine yourself standing on the shores of a remote Greenland fjord. It is cold, a night surrounded by a stunning arrangement of sky lights. Sheets of new ice cover the water, and icebergs float silently by on the tide. What a more beautiful sight can there be than that?

Greenland was originally settled by descendants of the present Inuit culture who called the island Kalaalit Nunaat - meaning "the land of the people." It acknowledged the name Greenland from Norse explorer Eirikur Rauoe Porvaldsson, more commonly known as Erik the Red. He cruised from Iceland to the island of Greenland in 982, and eventually spent years of farming along the southern coastline. He returned to Iceland in 986, aiming to encourage others to settle the island. He then came up with a name "Greenland." He reasoned that a pleasant name would be more likely to draw settlers. Many colonies eventually established themselves in Greenland, but some failed to survive. 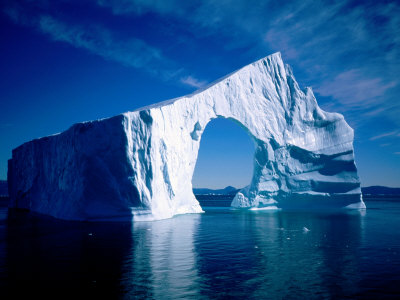