Germany’s geographical elevation ranges from the highest point of 9,717 feet at the Zugspitze of the Alps in the south to the shores of the North Sea in the northwest and the Baltic Sea in the northeast with the lowest point at Wilstermarsch at 11 feet below sea level. Between the mountain ranges lies the forested uplands of Central Germany and the low-lying lands of Northern Germany that are traversed by the Rhine, Danube, and Elbe, which are among the major rivers of Europe. Most of Germany has a temperate seasonal climate in which humid westerly winds predominate. Winters are mild and summers tend to be cool, though temperatures can exceed 30 °C (86 °F) for prolonged periods.

Wind-swept hills and the vacation destinations on the North Sea and the Baltic Sea in Northern Germany include Bremen, Hamburg, Lower Saxony, Meckleburg-Western Pomerania, and Schleswig-Holstein. Wine country and modern cities sharply cut by the breathtaking Rhine Valley and Moselle Valley in IWestern Germany include North Rhine-Westphalia, Rhineland-Palatinate, and Saarland. Hesse and Thuringia are located in the green heart of Germany with some of the most important historical and financial cities and the ancient Thurigian Forest in Central Germany.

Highlighted by the historical capital Berlin and rebuilt historic Dresden, the Florence of the Elbe, in Eastern Germany would be Berlin, Brandenburg, Saxony and Saxony-Anhalt. To see the Black Forest, the Alps, and the Oktoberfest, (the Germany of lederhosen and postcard pictures), travel to Bavaria and Baden-Wurttemberg. Fourteen cities belong to the historic highlights of Germany. These include Augsburg, Erfurt, Freiburg, Heidelberg, Koblenz, Mainz, Münster, Osnabrück, Potsdam, Regensburg, Rostock, Trier, Wiesbaden and Würzburg. Cologne Cathedral is one of the finest church buildings in the Christian world. Gargantuan proportion and unequaled craftsmanship made it a defining example of Gothic architecture.

While historically Germany was called “The Land of Poets and Thinkers,” it is difficult to identify a specific German tradition separated from the larger framework of European high culture. There are 240 subsidized theatres, hundreds of symphonic orchestras, thousands of museums and over 25,000 libraries spread over the 16 states.

Germany claims some of the world's most renowned classical music composers, including Ludwig van Beethoven, Johann Sebastian Bach, Johannes Brahms and Richard Wagner. Numerous German painters have enjoyed international prestige through their work in diverse artistic styles. German literature can be traced back to the Middle Ages as notable German philosophers have helped shape western philosophy since the Middle Ages. 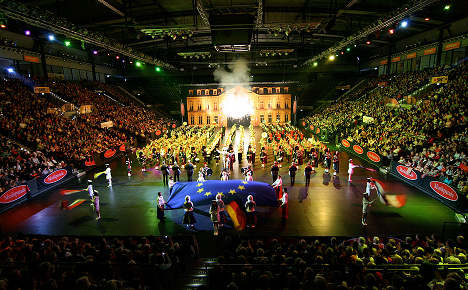