Metropolitan France (the mainland) is located in Western Europe. However, it has a number of territories in North America, the Caribbean, South America, the southern Indian Ocean, the Pacific Ocean, and Antarctica. These territories have varying forms of government ranging from overseas department to overseas collectivity.

France is the world's most popular tourist destination, boasting dozens of major tourist attractions, like Paris, Côte d'Azur (the French Riviera), the Atlantic beaches, the winter sport resorts of the Alps, the Castles of Loire Valley, Brittany, Normandy and Mont Saint Michel.

Lyon, the second largest city of France, has a history from Roman times to the Resistance.

Southeastern France (Rhône-Alpes, Languedoc-Roussillon, Provence-Alpes-Côte d'Azur and the Mediterranean island of Corsica) is the primary tourist region of the country outside of Paris, with a warm climate and azure sea, contrasting with the mountainous French Alps.

The world-famous Loire Valley is best known for its wines and chateaux and extends across two regions in west and central France. Cannes is the host of the annual Cannes Film Festival. Bordeaux is the “City of Wine” and capital of Southwest Region. Nice is a major resort on the French Riviera and the gateway to Monaco.

The earliest French literature dates from the Middle Ages. During the 17th century, moral and philosophical books left an important heritage for the authors of the following decades.

Important writers of the 20th century include Louis-Ferdinand Céline, Albert Camus and Jean-Paul Sartre. Antoine de Saint Exupéry wrote The Little Prince, which has remained popular for decades with children and adults around the world. 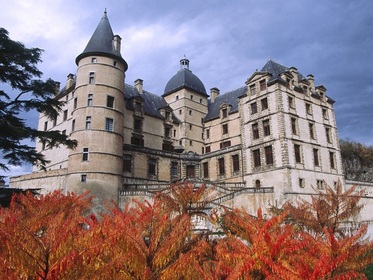