Ecuador has three main geographic regions, and a region in the Pacific Ocean. These are: La Costa (The Coast), with low-lying land in the west of the country; La Sierra (The Highlands), is the high-altitude band running north to south down the center of the country, mostly from the Andes; La Amazonia, or, El Oriente (The East), comprised of the Amazon Rainforest in the east; and Region Insular, the region containing the Galapagos Islands, west off the mainland. The capital, Quito, is in the Sierra region, and the largest city, Guayaquil, has one of the world's most active volcanoes. Mount Chimborazo in the Andes is said to be the most distant point from the center of the Earth. The country has a varied climate, mostly determined by altitude. The coastal areas have a tropical climate, with a rainy season. The highlands have a temperate climate and are mostly dry, and the eastern side of the mountains has a similar climate to other rain forest zones. Due to Ecuador being on the equator, there is little difference in sunlight during the year, and so no definitive summer or winter.

Ecuador has a range of attractions for tourists and locals alike. Banos, located in the middle of the Andes Mountains, is a place for relaxation from exploring the mountains and it is well known for its hot springs and landscapes. Cotopaxi National Park is situated near Latacunga. It is the most active volcano in the world, and is cone-shapes and snow-covered. The park itself houses many different plant and animal species, and has wild horses, deep, pumas and many more. It is also a good destination for bird watchers, and has a small museum that shows the park's geology and animals. Another place worth a visit is the town of Otavalo. This town is effectively a market, busiest day being Saturday, and is a shopper's paradise. The natives sell everything in this town, from belts to carpets, and everything is made by hand. The town is about 90 minutes away from the capital, Quito.

The Mestizo population, influenced by a mixture of European and Amerindian influences, defines most of Ecuador's culture. Spanish is the first language by more than 90% of the population and is the second language of more than 98%. A section of the population speaks Amerindian languages but mostly as a second language. A key item in Ecuadorian culture is the Panama hat, which is considered a great craft to manufacture. There are many contemporary writers in Ecuador, including a well-known novelist, Jorge Enrique Adoum, and poet, Jorge Carrera Andrade. The best-known Ecuadorian art is from Escuela Quitena, which are on display in churches in Quito. 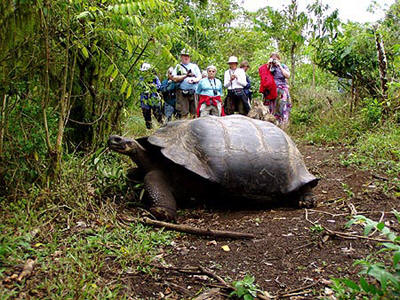