Created by volcanic activity, the Northern Cook Islands are low laying atolls; sunken volcanoes with coral growth around the top. The Southern Cook Islands are raised volcanic isles, and the terrain of the islands runs the gamut of lush tropical forestry and sandy white beaches to rugged mountainous landscape.

Since Cook Islands are located in the southern hemisphere, their seasons are reversed making the winter season in the northern hemisphere a perfect time to visit. Summer is from November to April with the average temperature hovering at 84 degrees Fahrenheit. Sudden downpours are not unusual during this time, but in 5 minutes the sun comes back out. Winter, from May to October, brings with it a drier season and average temperatures of 77 degrees Fahrenheit.

on Cook Island. Although Cook Islanders are devoutly Christian, many of them still manage to hold onto some of their ancestral customs resulting in an unusual blend of Christian and Pagan traditions. You can see the tribal influences in their dance, food, and music.

65% of the locals belong to the Church of Cook Island. The rest are members of other Christian organizations including: Protestant, Latter Day Saints, Roman Catholic, Seventh Day Adventists, Baha'i Faith, Apostolic, Assembly of God, and Jehovah's Witnesses.

Maori, or Rarotongan, is the official language of Cook Islands and is widely spoken, however, English and Pukapukan are also used and understood by the majority of the islanders. 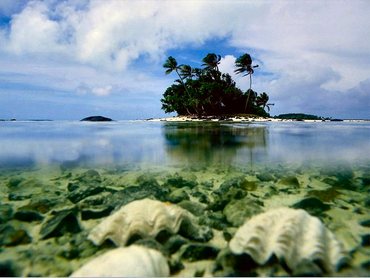