Bordering the Gulf of Thailand, Cambodia’s terrain is as vast as it is varied. To the south, tropical islands dot the coastline. To the northwest, mountains and wild country have an abundance of waterfalls throughout. In between, there is everything from tropical wildernesses to well-developed metropolitan areas.

There are two primary seasons in Cambodia, one of which is very dry (early November to March) and the other of which is very wet (mid-May to early October). Short transitional periods often usher in dry air that is a little cooler than average. Still, temperatures in Cambodia do not typically range far from its average of 25 degrees Celsius. The region is known for the seasonal monsoons (strong winds) that can carry with them large amounts of rain in the wet season and dry air in the dry season.

The capital city of Cambodia, Phnom Penh, boasts the country’s largest population, which is just shy of one million residents. Like any major city, it is full of energy, culture and plenty of things to do and see. Another thriving city that has just recently been revitalized is called Siem Reap. This high-end city is now considered the epicenter of the new Cambodia. Spas, dining hot spots and hotels can be found in abundance, which makes it a top destination for travelers with a hankering to be pampered. This city also serves as the primary access point for anyone that wishes to visit the famed temples of Angkor.

For those interested in a more low-key, outdoors look at Cambodia, Kampot is a great option. This seaside town is located very near Bokor National Park. Hiking the trails that weave in and out of the large, protected forest, you have the potential to enjoy a firsthand look at endangered species such as the Indian elephant and the yellow-throated martin.

Cambodian culture has been heavily influenced by both India and China. The majority of the population practices either Theravada Buddhism or an adapted form of Hinduism, and temples are a common sight, no matter which city or village you choose to visit. Cambodians tend to operate on the principle of Karma, or “reaping what you sow.”

Traditionally, Cambodians wear a checkered scarf called a Krama, which serves a number of different purposes (fashion piece, baby hammock, towel, etc.). Many of their other clothing items have to do with religious beliefs, such as Buddhist pendants and Hindu shawls. Cambodians enjoy feast days that are replete with music and traditional dancing. The Pinpeat Ensemble is a popular sound in the country, comprised mostly of percussion instruments. 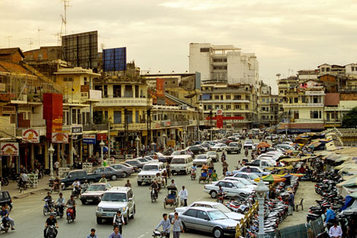