The geography goes from the Andes Mountains to the Amazon basin. Bolivia is surrounded by Brazil to its north and east, Peru and Chile to the west and Argentina and Paraguay to the south. The Amazon rainforest is to the east and the world's largest salt flat is in the southwestern region.

The weather is primarily tropical, though in the higher parts of the Andes it can become quite cold. It rains often, especially during the summertime in the Southern Hemisphere. From May to September there is less rainfall, when the temperature throughout most regions averages 86 degrees Fahrenheit during the day.

There are many famous attractions to visit in Bolivia, including:

- "Chiripa Pata" in the Lake Titicaca area, a very famous archeological site. Lake Titicaca itself is located on the border of Bolivia and Peru and is the largest lake in South America, and the highest commercially navigable lake in the world at 12,500 feet above sea level.

- "Fuerte de Samaipata" is a UNESCO World Heritage Site, preserved and maintained by the World Heritage Program. This is one of the ruins of an Inca city, with a famous temple.

- The "Witches Market" in La Paz is an authentic Bolivian shopping and cultural experience. Little kiosks are located on cobblestone streets where you can purchase potions, dried herbs, local food, and rare objects. Armadillos in the area are viewed as a good charm, believed to ward off thieves. The vendors are very friendly and always have a smile on their faces.

Bolivia's economy has not changed much throughout the years and has largely relied upon exports of silver, coca, and tin, and the agricultural sector has not improved much through the years because of a difficult topography and political instabilities. The agricultural products that are produced and exported include: cotton, sugarcane, corn, coffee, rice, soybeans, and potatoes. Industrially, Bolivia has some food processing and petroleum refining operations, small-scale manufacturing, mining and smelting. There is a great hydroelectric potential, but it is currently underutilized. Although Bolivia is part of the "Andean Community Organization", the main trading partners with Bolivia are the United States, Peru, Argentina, and Brazil. 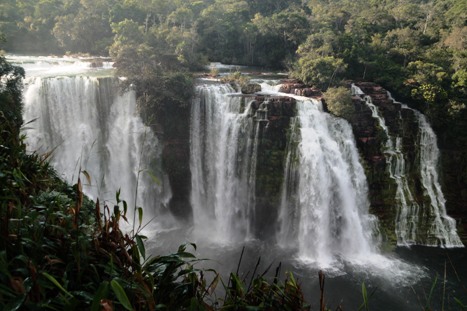