The Kingdom of Bhutan is a country lying at the feet of the Himalayas, bordering China, Tibet, India and Nepal. Myanmar and Bangladesh are also nearby countries. It is a compact nation, featuring a territory of 46,500 square kilometers. It is also called the Switzerland of Asia, not only because it is expensive, but because its shape compares to that of the European country. Ten per cent of the overall territory is covered by glaciers, which are the most important source of water for the country.

The Kingdom of Bhutan is a country with numerous tourist attractions. The Taktshang Goemba is the famous monastery of the tiger’s nest, perched on a rock face. It is an impressive monastery and a sacred place for the Bhutanese.

The typical tour for tourists includes visits to the numerous dzongs, situated in central or western Bhutan. As tourism is restricted, visitors are advised to hire guides and avoid wandering around on their own. The Punakha dzong is the absolute highlight of any visit to Bhutan. It is the largest, oldest and still bustling agora, where individuals, monks and ordinary visitors meet. The Jhomolhari Trek is the sacred mountain of the Kingdom. It features settlements and remote villages and the lushest natural setting in the country. Trekking is allowed there as long as the visitors do not step into the sacred Buddhist paths. Gasa is the hot spring area of the country. The Bumthang is one of the most precious and oldest Buddhist sites in the heart of the country. The valleys of the country are also very well known. The Thimphu and the Punakha are the most famous ones and are linked by a very narrow road. They offer a lovely view of the glaciers

The modern culture of the country is affected by the ancient culture, which is obvious in the music, literature and painting. Monasteries and religion are the main themes here. The people of the Kingdom appreciate and preserve their cultural and religious heritage above everything else; therefore, tourists are not free to wander around the country as they like. Most of the monasteries and temples are off limits to the visitors, as they are considered to be holy institutions. 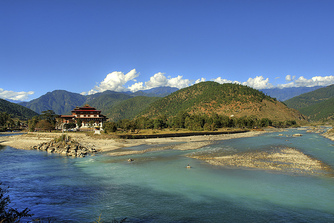