Albania has a total area of 11,100 square miles. Its coastline is 224 miles long along the Adriatic and Ionian Seas. The lowlands of the west face the Adriatic Sea. Seventy percent of the country is rugged and mountainous and thus often inaccessible from the outside. The highest mountain is Korab situated in the district of Dibra. It has a continental climate at its high altitude regions with cold winters and hot summers. The three largest and deepest tectonic lakes of the Balkan Peninsula are partly located in Albania. Over a third of Albania is forested and very rich in flora.

Albanian Alps have a size of roughly 864 square miles and lie in the prefectures of Shkodra and Tropoja. Thirteen peaks exceed 8,200 feet in height. Albania's principal rivers are the Valbona, Shala, Cemi and Kiri. There is a great diversity of fauna and flora, particularly in the Theth National Park. Major centers of Alpine tourism are Boga, Theth, Vermosh and Valbona.

The mountains create some amazing features such as the Canyon of Osum River and valleys like Valbona in the Albanian Alps. They offer great opportunities to practice trekking, skiing, climbing, etc.

Lake Ohrid near the city Pogradec is the most important for swimming and bathing in the inner part of Albania. There are several tourist areas around the lakeshore such as Lin, Drilon and Tushemisht.

Shkodra Lake near the city of Shkodra is the largest in the Balkans at 25 miles long with surface between 140 - 200 square miles. It is one of the largest bird reserves in Europe, having some 240 bird species inhabiting its shores, including some of the last pelicans in Europe, and thus is popular with birders.

Lura Lakes are a complex of seven carstic lakes in the mountain region of Kunora Lures in the Dibra Region. They occupy glacial cirques at heights of between 3,900 - 4,900 feet. Exotic in nature with cool, pristine waters, they are surrounded by old beech and pine forests.

Albanian folk music falls into three sylistic groups, with other important music areas around Shkoder and Tirana; the major groupings are the Ghegs of the north and the southern Labs and Tosks.

The Albanian language comprises its own branch of the Indo-European language family. Cultural resistance was first expressed through the elaboration of Albanian for church texts and publications. The Protestant reforms invigorated the development of the local language and literary tradition.

Meshari (The Missal) by Gjon Buzuku, published in 1555, is considered as the first literary work of written Albanian. Albanian writings of those centuries included historical chronicles, too. 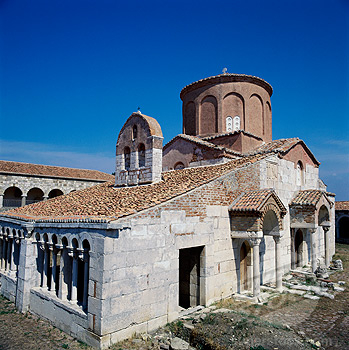